The NExScI is a science operations and analysis service organization for NASA Exoplanet Exploration Program projects and the scientists and engineers that use them. The NExScI facilitates the timely and successful execution of exoplanet science by providing software infrastructure, science operations, and consulting to the NASA Exoplanet Exploration Program projects and their user communities.

The NExScI is part of IPAC, located on the campus of the California Institute of Technology.

NExScI has developed and maintains several public astronomy data archives and software tools. New datasets and data analysis tools are added to the archives as they become available.

NExScI provides operational software infrastructure and support; archiving of and access to observational data; and consultation for all stages of an experimental project, from concept development and proposal writing to implementation and analysis. 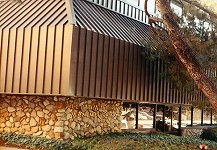 NExScI is in the Morrisroe Building on the Caltech campus

Most of our webpages have specific contact information our various programs, missions, and data archives. For general inquiries, please call (626) 395-1860 or email nexsci@ipac.caltech.edu

NExScI is located on the Caltech campus in the David W. Morrisroe Building. The Morrisroe building is also known as IPAC.

Parking on the Caltech Campus

For those who are parking on campus, you will need to obtain a visitor parking permit and abide by Caltech parking regulations. Visitors are required to display a permit if their vehicle is parked on campus between the hours of 7am-5pm, Mon-Fri. Information about parking rules and regulations can be found on the Caltech Parking webpage.